DTIM is a multiplier of the beacon interval. The beacon interval is the time (ms) between beacons which contain information about the network and synchronize the wireless network. The DTIM is sent every n beacons and contains queued multicast information. Multicast data is data which is sent to multiple devices on the network simultaneously (as opposed to several separate data streams for each device).

The default beacon interval for many home wireless routers is 100ms, and the default DTIM interval is 1. Therefore, Delivery traffic indication messages are sent with every beacon.

Why is this significant? Many mobile devices will enter Power Save Mode when they’re sleeping on a wireless network (laptops, smartphones, etc.), and one of the specifications of Power Save Mode allows devices to sleep during and ignore non-DTIM beacons, and only listen to the DTIM beacons. The wireless router will queue up multicast traffic and send it with the DTIM.

A shorter beacon interval causes wireless devices to connect to a wireless network faster, but creates more wireless traffic which decreases wireless performance as there is less time during which useful data can be transferred to-and-from the router. A longer beacon interval can cause wireless clients to drop connectivity and the network may get out-of-sync if too many wireless clients are connected, but performance may be increased.

A longer DTIM interval can help improve battery life for mobile devices as they can remain sleeping for longer, but a router’s multicast buffer may overflow, and time-sensitive data may be delayed.

The web is full of clutter – ads, share buttons, navigation menus, comments, et cetera. Sometimes we want to read an article without all those distractions, and Safari on iPad allows us to do just that. Take a look at this news article on Reuters: 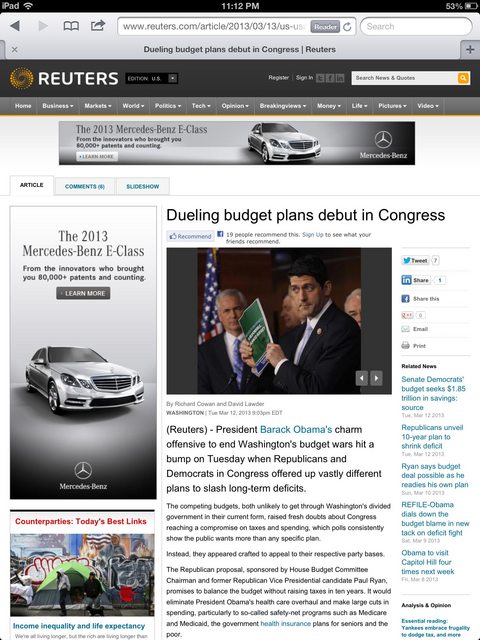 Less than 40% of the visible page is actual article content. Fortunately, there is a quick and easy way to remove the clutter from the screen without trying to scroll down and zoom to an acceptable level.

Simply tap “reader” in the address bar, and Safari will extract the valuable page content and present it like so: 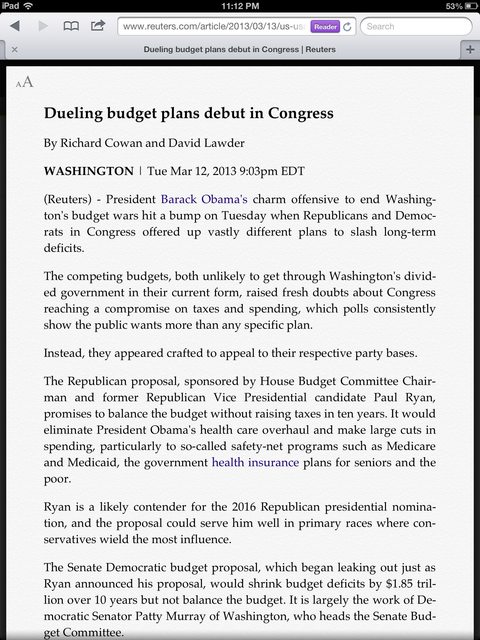 All of the ads and clutter are gone, and the important text is presented in an easy-to-read format. The Reader button will automatically show when Safari can create a simplified version of a webpage.

Welcome to our collection of WiFi tutorials! We can help you optimize and secure your wireless network quickly and easily.

The first step you’ll need to take is open your router/modem’s configuration page within your web browser. This is done by navigating to your router’s IP in a web browser already connected to the network. We have a list of default IPs and username/password combinations, as well as a visual guide.

When you’ve gotten into the router’s configuration page, the first thing you’ll want to do is increase your router’s security. Many households either leave their router unlocked or use he default login information. This leaves you open to the public using your internet, and of an even greater concern, packet sniffing (your information can be stolen and spoofed). All routers will have different layouts, but in general you’ll navigate to a wireless security page and set up a password.

After your network is secure, there are some tweaks you can preform to increase its range and performance:

Please leave questions, comments, or concerns below, and I wil try to answer you or amend the article.

Throughout this year we have seen T-Mobile roll out their Challenger Strategy – a mission to modernize their network after the failed AT&T merger and rise up as a powerful national carrier. The strategy included tower upgrades and spectrum refarming in an effort to get ready for an LTE rollout in 2013.

T-Mobile’s network modernization strategy involved maintenance on towers to create a fiber optic connection from the ground to the top of their exiting towers for increased bandwidth and reduced latency and replacing amplifiers with tower-top electronics. The new amplifiers will also allow T-Mobile to launch LTE Advanced. T-Mobile promised better in-building penetration and enhanced data speeds due to this modernization.

T-Mobile is also working on refarming spectrum to make room for an LTE rollout on their 1700MHz bands. The company has historically used 1700MHz to deploy HSPA+ (their “4G” network), and are now deploying HSPA on 1900MHz, hoping to make room on 1900MHz for LTE. This refarming process will also allow devices such as the iPhone, the HTC One X, and many others equipped with an HSPA radio on 1900MHz (the international norm) to access T-Mobile’s HSPA+ network.

As 2012 comes to an end, T-Mobile has announced that their network modernization is fully live in thirty-seven markets, which cover over 100 million people.

OS X Mountain Lion introduced a fantastic new feature for users with an Apple TV: AirPlay mirroring now allows you to mirror your desktop to a TV wirelessly through an Apple TV.While the new feature has the ability to work great when streaming video (think YouTube, Hulu, or VLC videos), network lag may degrade your experience. This article wil teach you how to create a quality link between your Mac and Apple TV for the best experience.

Upgrade to a wired connection

A wired connection offers you minimal lag and higher bandwidth than is available from most wireless connections. Users report that having at least one device (either the Apple TV or the Mac) wired directly to the network significantly improves the delay, and having both devices wired together creates an ideal connection.

The Apple TV also supports a 5GHz wireless connection. WHile the 2.4GHz band is very noisy and prone to interference from cordless phones, microwaves, and other wireless networks on nearby channels, the 5GHz band is much cleaner. Upgrading to a wireless router which supports 5GHz can vastly improve your performance in urban settings.

If your router supports WMM (WiFi Multimedia) functionality, enable this. Think of it as a QoS control for your LAN which gives priority to media streams over other file transfers. This will become especially helpful on high-traffic networks.